Contact British Airways: Find below customer care details of British Airways, including phone and address. Besides contact details, the page also offers information and links on services of British Airways. You can reach the below contacts for queries on new reservation, reschedule or cancellation, baggage assistance, or others.

British Airways – Email (Customer Relations)
Do you have a query or complaint you would like to mail? Click here to email the British Airways customer care.

Check-In
You can check in for your British Airways flight online at ba.com; on your internet enabled mobile phone; at an airport kiosk; or at a British Airways check-in desk. To check in online click here

– Online check-in closes one hour before your flight’s scheduled departure.
– By visiting ba2go.com on your mobile phone you can select seats and check in for departure or return flights. Once you have checked in you can pick up your boarding card from the airport or email the card for printing later.
– You can also check in through airport kiosks. Check in for your onward or return flight, if it’s within 24 hours.

Manage Your Booking
To manage your booking online click here

Flight Status
To check a British Airways flight status click here. You can also get the same by clicking here

Checked Baggage – British Airways allows you to check in a free baggage which depends on the class of travel. If you would like to carry an extra bag, charges apply. If you want to take bags which are larger or heavier than the guide given above, you will need to send them as cargo. For details on baggage, price, etc click here

There are three tier levels of the Executive Club: Blue, Silver and Gold. Tier Points allow you to move up through the different levels, enjoying the additional benefits each tier brings. Click here to read more. 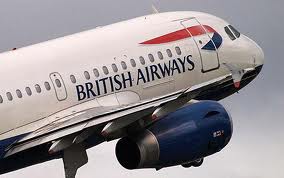 British Airways is a founding member of oneworld, the alliance of airlines around the globe, which together serves some 700 destinations. Incidentally, British Airways was one of two airlines that operated a supersonic passenger service in the year 1976. However, both Air France and British Airways ceased its Concorde operations in 2003.

At this year’s Business Travel Awards, British Airways won the categories for Best Airline Worldwide and Best Longhaul Airline. The airline also won the award for Best Corporate Social Responsibility for the work it does within the community and environment.