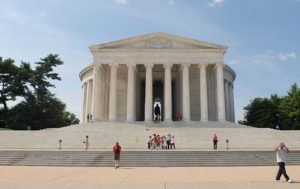 The Thomas Jefferson Memorial in Washington, DC, is a presidential memorial dedicated in honor of America’s founding father Thomas Jefferson. The national landmark is located just south of the White House and was erected in 1943 as part of the capital’s beautification plan. Located in West Potomac Park on the shore of the tidal basin of the Potomac River, the memorial is managed by the National Park Service, a federal executive department of the US government.

The memorial’s architecture was fashioned by John Russell Pope and erected by John McShain to coincide with the 200th birth anniversary of Jefferson. The Jefferson memorial draws inspiration from the Roman Pantheon in Rome and the Rotunda at the University of Virginia.

Recognised as one of the fourth most popular architecture in the country, the memorial houses the enormous bronze statue of Jefferson. The statue of Thomas Jefferson centered in the dome inside of the memorial, is faced towards the White House. Rudolph Evans, the sculptor of the statue, wanted the statue to portray the Age of Enlightenment. The Age of Enlightenment was the evolution of the 18th century that focused on liberty and equality as natural human right, something Jefferson believed in.

The memorial is surrounded by water and is best visited in spring when the cherry trees surrounding the tidal basin and the memorial have blossomed. During the night, the memorial stands dazzling as it reflect it’s image and the moonlight on the serene waters.

There are the circular marbled stairs at the exterior of the memorial leading to the landing which is circled by 26 ordered columns. Attached to the circular structure is an atrium with 10 ordered columns. At the top of the atrium is a frieze, created by Adolph Weinman. The frieze depicts the drafting of the declaration of independence with Thomas Jefferson at the center, Ben Franklin and John Adams to his right and Roger Sherman and Robert Livingston to the left.

The Georgia white marble walls of the memorial hold excerpts of Jefferson’s writings. His writings spoke of his beliefs in religious freedom. The southwest walls display written words of Thomas Jefferson taken from the declaration of independence – “We hold these truths to be self-evident: that all men are created equal, that they are endowed by their Creator with certain inalienable rights, among these are life, liberty, and the pursuit of happiness.”

Visitors to the Thomas Jefferson Memorial can visit any time of the year. There are no fees or reservations needed for entry. However, you will need a permit for organising commercial photography, weddings or special events. The Rangers at the park are available throughout the day for any assistance. For those with their own automobile, you will find ample parking around the memorial. The Metrobus and Metrorail also operates regular services connecting the tourist landmark. As for activities to enjoy during your visit, there are guided tours and a number of outdoor activities. Browse the National Park Service website to view a calendar with ongoing or upcoming events, or to learn about the park, it’s history and other key details. For more information or queries on timings, tickets, events, parking, or others, reach the Thomas Jefferson Memorial support.